What is a two phase commit / XA transaction

A two-phase commit is a standardized protocol that ensures that a database commit is done properly (atomic) over multiple resources. But what does this mean? 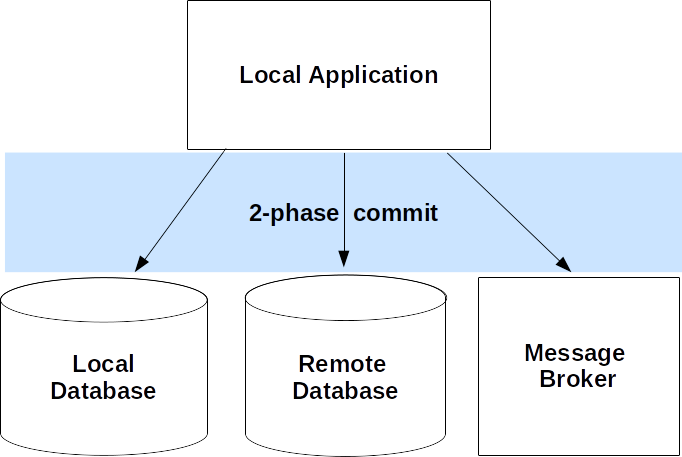 Now let us assume these 3 resources are needed for a simple business operation: transfer money from one bank account to a different bank account.
Let us dive deeper into the system architecture:

Now let's say you need to transfer 500 USD from local to foreign bank. This would result in the following basic operations:

The straight forward way to implement this would be to do a "commit" to a resource after reading and updating each resource. This works well if all resources confirm the commit. But what happens if the local database reported a commit but the second database reports an error and the commit fails?
The local bank account would have a reduced balance of 500 USD but the receiver will never get the 500 USD.
(Just thinking if I could be the owner of a local bank ;-) great profits in the near future :-) )

To solve the issue we need some sort of a surrounding management for the whole transaction over all resources. This means that at the start of our money transfer we need to tell all resources:

Hey I want to start a transaction over multiple resources (distributed transaction), please keep in mind that I will update some data on your resource, but you will get one final commit after all my resources reported that the local commit will go through without any error. Otherwise ensure to rollback the change, as if I have never asked you to change anything.

Already in the early days of distributed computing the engineers have introduced a distributed transaction management for such cases. There are many names for it:

1. What does the XA in XA transaction mean?

XA ist the abbreviation for the X/Open XA standard specification (XA stands for eXtended Architecture) of the Open Group, which defined a common standard for the Distributed Transaction Processing. This standard describes specifically how Resources (with resource managers) and Transactions (with transactions managers aka XA coordinator) are done.

2. How is the 2pc / two phase commit implemented?

In the first phase of the protocol, called a commit-request phase or a voting phase, a coordinator (normally the process that initiated the commit) gets the approval or rejection to commit the data changes of involved processes. Only if participants/subscribers approve it the coordinator decides to commit, otherwise it decides to abort.

In the second phase (a commit phase) the coordinator informs the participants about the result. According to the result, either the entire transaction is rolled back or all the subtransactions are successfully completed and the temporarly locked resources are released. 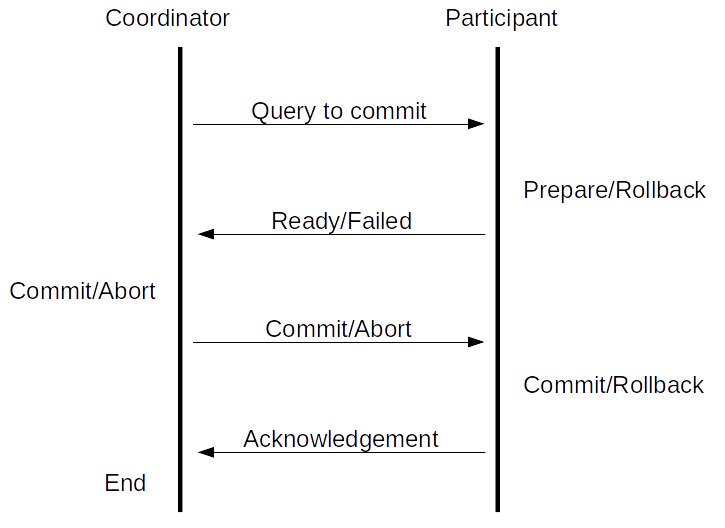 During the two phases, the following messages are exchanged between the coordinator and the participants:

2pc is a blocking protocol, which means that if the coordinator fails permanently, some participants will never resolve their transactions, which might result in indefinite blocking. To eliminate this issue, we can use 3pc protocol. You can read more about it in What is a 3 phase commit / 3pc?